The Toronto Star about a Luxury Condo Renovation at Palace Pier 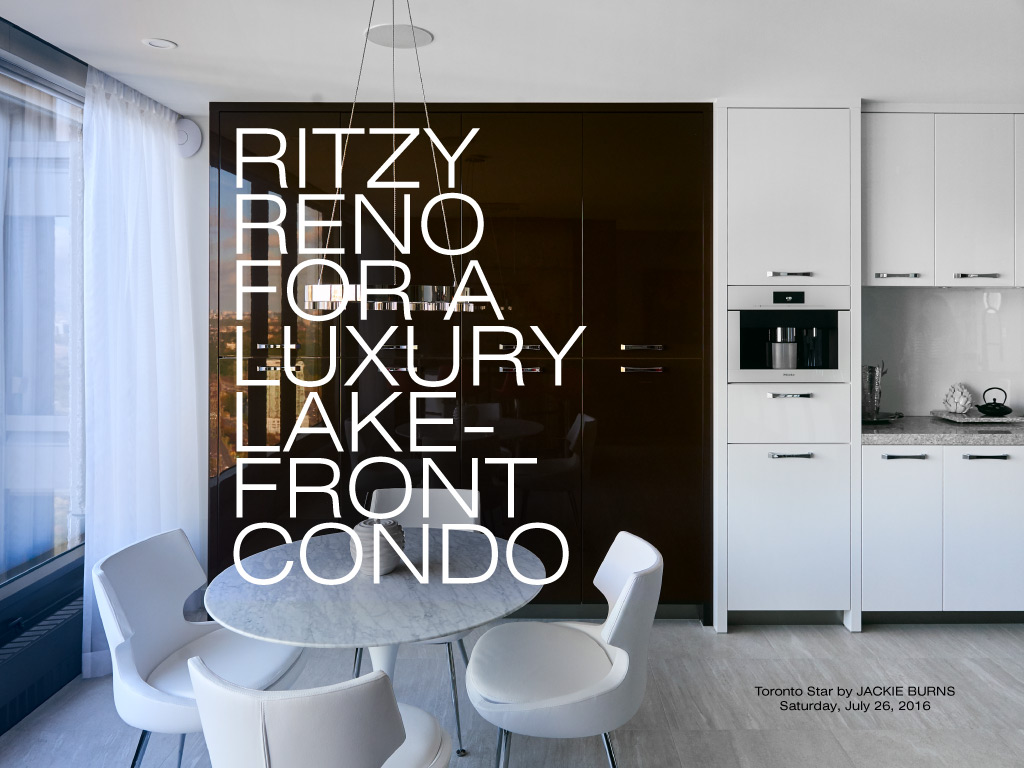 OLGA AND GERALD HESS LOVE THEIR SOPHISTICATED $600,000 CONDO UPGRADE. THE ONCE-EXCLUSIVE BUILDING IN SOUTH ETOBICOKE IS RETURNING TO ITS ORIGINAL OPULENCE.

Read more about the condo renovation project:
Kitchen for a 3250 Square Feet Condo

Over drinks at the bar, Olga and Gerald Hess are framed by a wall of windows with a high, resort-style view of the shoreline and sailboats in the water below. The couple are not away on holiday, but at home and looking out on Lake Ontario from their newly renovated 3,250-square-foot condominium at Palace Pier, at the eastern end of south Etobicoke.

“We just love this place,” says Gerald, 60, a transportation

industry executive. Their luxury pad was purchased two years ago for $850,000 and completely gutted in a massive $600,000 condo renovation project.

“If we were to sell, we would list it for $1.9 million,” he says. Not that they have any intention of selling, Gerald admits. The contemporary home presents like a showroom, brightly coloured artwork popping on crisp, white walls.

The couple moved to Palace Pier in 2013 from their neighbourhood in North York neighbourhood. They were drawn to the Pier’s nine acres of green space, just off the Martin Goodman Trail where they go for walks. The Hesses initially moved into a unit on the 38th floor, but when Olga, 50, started seeing other suites that were renovated, she was inspired to do the same.

In 2014, they enlisted the help of real estate agent Ania Baska, a long-time resident of the building, to help them find an older unit in need of a renovation. The 46-storey Palace Pier was built in 1978 and at the time was known as Canada’s most luxurious condo development. (Second tower Palace Place was completed

in 1991.) With 30 per cent of the units having three bedrooms, these days the building attracts retirees downsizing from houses and young families. Many, like the Hesses, are sparing no expense overhauling their suites to five-star standards.

Baska found the couple a unit on the 42nd floor that was begging to be gutted and redesigned. The Hesses snapped it up and sold their original unit. It took seven months to complete and Olga, being a graduate of a construction college in Russia, had a clear idea of what she wanted from the condo renovation: a clean, modern home but also one where they could relax and live with comfort — a contemporary home which could incorporate traditional aspects to make it softer.

“I knew that if we made it very modern, I would get tired very fast,” she says. “That’s why I wanted to make it a more contemporary, more livable space.”

While Olga sketched out her vision for their home, she enlisted the help of designer Andy Bakhtiyarov to assist with the technical aspects, including the design for the cabinetry in the kitchen, bathrooms and a walk-in-closet that is organized like a high-end fashion store.

Bakhtiyarov says much of Olga’s vision was European inspired, prompting him to import doors for the bedrooms and bathrooms from Germany at $600 a pop.

“This is one of my favourite projects,” he says. “Olga has exceptional taste for design and she knows exactly what she wants.”

The couple also hired general contractor Cesar Puente to help co-ordinate the trades, make sure everything was up to code, and oversee the demolition and cleanup process that would see eight dumpsters stuffed to the brim with garbage.

“The biggest stress was the garbage,” says Olga, noting the endless trips down in the elevator and difficulty finding space outside for the container.

Pre-wiring in the ceiling took place during the demolition to facilitate a sophisticated $40,000 home automation system; everything from the window coverings to the sound system to the air conditioning can be controlled from their smart phones. The modems, PVR, Blu-ray player and stereo system are all controlled wirelessly and tucked away in a sleek cabinet, along with a sophisticated back-up system for power failures. “Olga did not want to see one wire!” jokes Gerald.

The couple also spared no expense renovating their state-of-the art, 600-square-foot kitchen and adjacent bar area, dropping $200,000 for luxurious features like Cambria quartz stone surfaces and top-of-the-line Miele and Sub-Zero appliances, including a 72-inch custom Miele fridge and freezer. A 178-bottle, Sub-Zero wine cooler is another favourite feature for the couple, who love entertaining friends.

Moving to the Pier has provided an endless source of social opportunities for them. More than 100 residents of the building came to celebrate the big reveal of their condo renovation.

“We really have a great community here,” says Gerald. “We saw that when we hosted our house-warming party. The last guest left at 3 a.m. and it started at 5 p.m.”

Read more about the condo renovation project: Kitchen for a 3250 Square Feet Condo